Buy tickets to Harvey on Broadway 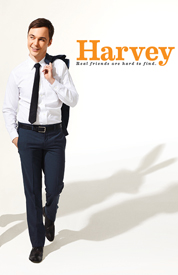 Here is the official information for Harvey on Broadway:

Jim Parsons stars as one of modern theatre’s most lovable characters, Elwood P. Dowd. Charming and kind, Elwood has only one character flaw: an unwavering friendship with a 6-foot-tall, invisible white rabbit named Harvey. In order to save the family’s social reputation, Elwood’s sister Veta (Jessica Hecht) takes Elwood to the local sanatorium. But when the doctors mistakenly commit his anxiety-ridden sister, Elwood — and Harvey–slip out of the hospital unbothered, setting off a hilarious whirlwind of confusion and chaos as everyone in town tries to catch a man and his invisible rabbit.

To read reviews of Harvey on Broadway, click the link below:

To buy tickets to Harvey on Broadway click the link below: