Buy tickets to One Man, Two Guvnors on Broadway 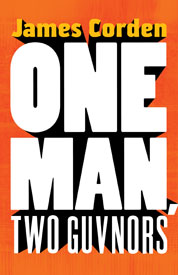 One Man, Two Guvnors on Broadway click the link below:

Here is the official information for One Man, Two Guvnors on Broadway:

About One Man, Two Guvnors

In One Man, Two Guvnors, James Corden stars as “Francis Henshall” (“One Man”). Always-famished and easily-confused, Henshall agrees to work for a local gangster as well as a criminal in hiding (“Two Guvnors”), both of whom are linked in a tangled web of schemes and romantic associations… none of which Francis can keep straight. So he has to do everything in his power to keep his two guvnors from meeting while trying to eat anything in sight along the way. Simple.  Falling trousers, flying fish heads, star-crossed lovers, cross-dressing mobsters and a fabulous on-stage band are just some of what awaits at the most “deliriously funny” (The Daily Telegraph) new play to cross the pond in decades.

To read reviews of One Man, Two Guvnors on Broadway, click the link below:

To buy tickets to One Man, Two Guvnors on Broadway click the link below: